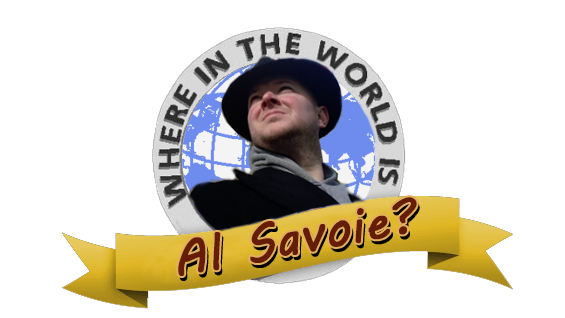 My wife always complains whenever I get to travel somewhere that sounds exotic.  Be it Japan, Bahamas, Brazil or Singapore, those who don’t travel for work assume that you arrive at your destination, dress down and hit the beaches.

That is not the case.

As I sit in at the Denver airport waiting for my 3rd connecting flight, watching travelers in a good mood, realizing that many of these people are excited to reach their destination.. as either, an adventure or relaxation awaits. 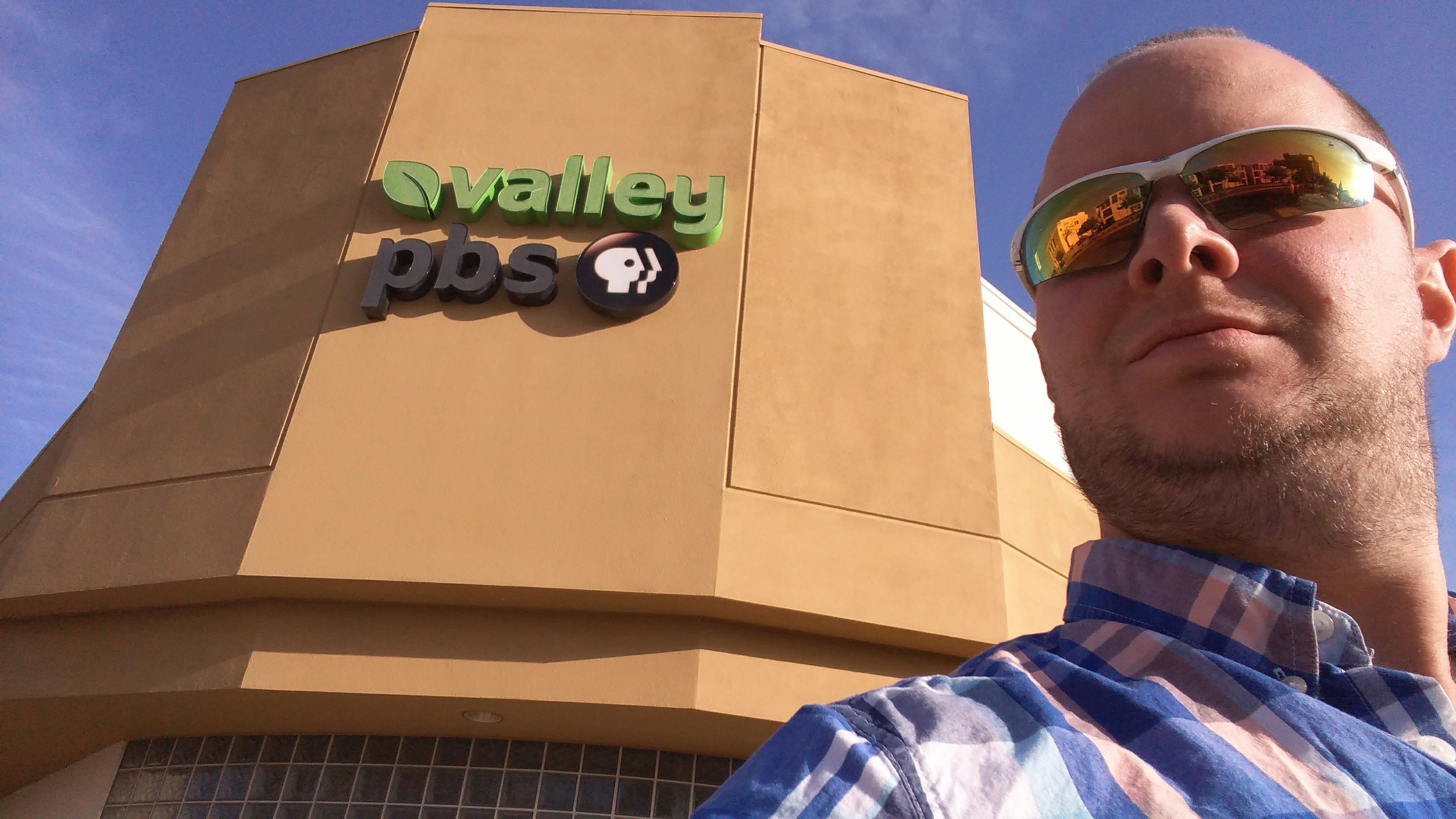 My latest trip was to Fresno,  California for a two day training session at Valley PBS.   Being that I live in Halifax, roughly 6000km away from Fresno, my trip involved a stop in Montreal and San Francisco before reaching Fresno airport.   My journey started Monday at 4:30 am ATL (or… 00:30 PST), ending at around 6:00 pm PST (10:00pm ATL).  That’s what we call, a ‘paid travel day’ in the business.  Depending on internet services and your tools at hand, you may or may not be able to get some work done.  But you are away from home, and rightfully so, should be compensated for it.

This 17 1/2 hour trek is nothing compared to the 30 to 40 hrs journeys that are done when traveling to Mumbai, Jakarta or Singapore.

Luckily, for some of us frequent travelers, we get some perks for these long sacrifices.  We get priority boarding (which guarantees a spot for our carry-on luggage), we get some preferred seating, either with leg room or your choice of window or aisle.  Lounges and fast lanes at security are also very much worth it.  And if you’re in the Super Elite category, you also get a concierge that calls you with changes to your flight status or alternative routes.   It’s great getting treated like a king.   But that’s not always the case, as I’ll mention below.

I arrived in Fresno, a lovely town in mid-central California.  There are no beaches.   You prefer having your hotel close to where you work, so that you don’t spend any time in traffic or you can sleep in as you will most certainly be jet lagged.  Depending on the city, you may be staying in sketchy area, where the local homeless immediately target the unfamiliar, semi-well dressed.   There are cases (such as my trip to Venezuela and El Salvador) you get an escort, who drives you around, and warns you not to go to certain places on your own.  Besides, I can’t speak every language out there; I personally know French and a little bit of Spanish.

Therefore, you arrive at your hotel, and it’s late, and you’re tired after traveling for 17 hours… and you’re hungry.  But it’s only 6pm.  So, rather than go to, yet another restaurant, trying to eat something relatively healthy, you succumb to the exhaustion and order delivered pizza.   Besides, your call tomorrow is for 9am.

It’s 4am PST and I’m wide awake.  5 hours before I need to go into work.  I could try to keep sleeping, but you’re also only there for 2 days, so adapting to this timezone will only make it more complicated when you travel back home.

Yes, I’ll likely have some breakfast at the nearby Denny’s, because the hotel’s restaurant is terribly over-priced.  You’re thinking, “over-priced? who cares! the company will pay for it.”  While yes, that is correct, at the same time you want to keep both your clients happy.  And by both, I mean, the client you’re training, and the company that hired you to do the training in the first place.   It’s a fine line where, you want to have comfortable meals, but at the same time, caviar and lobsters won’t get you called back. 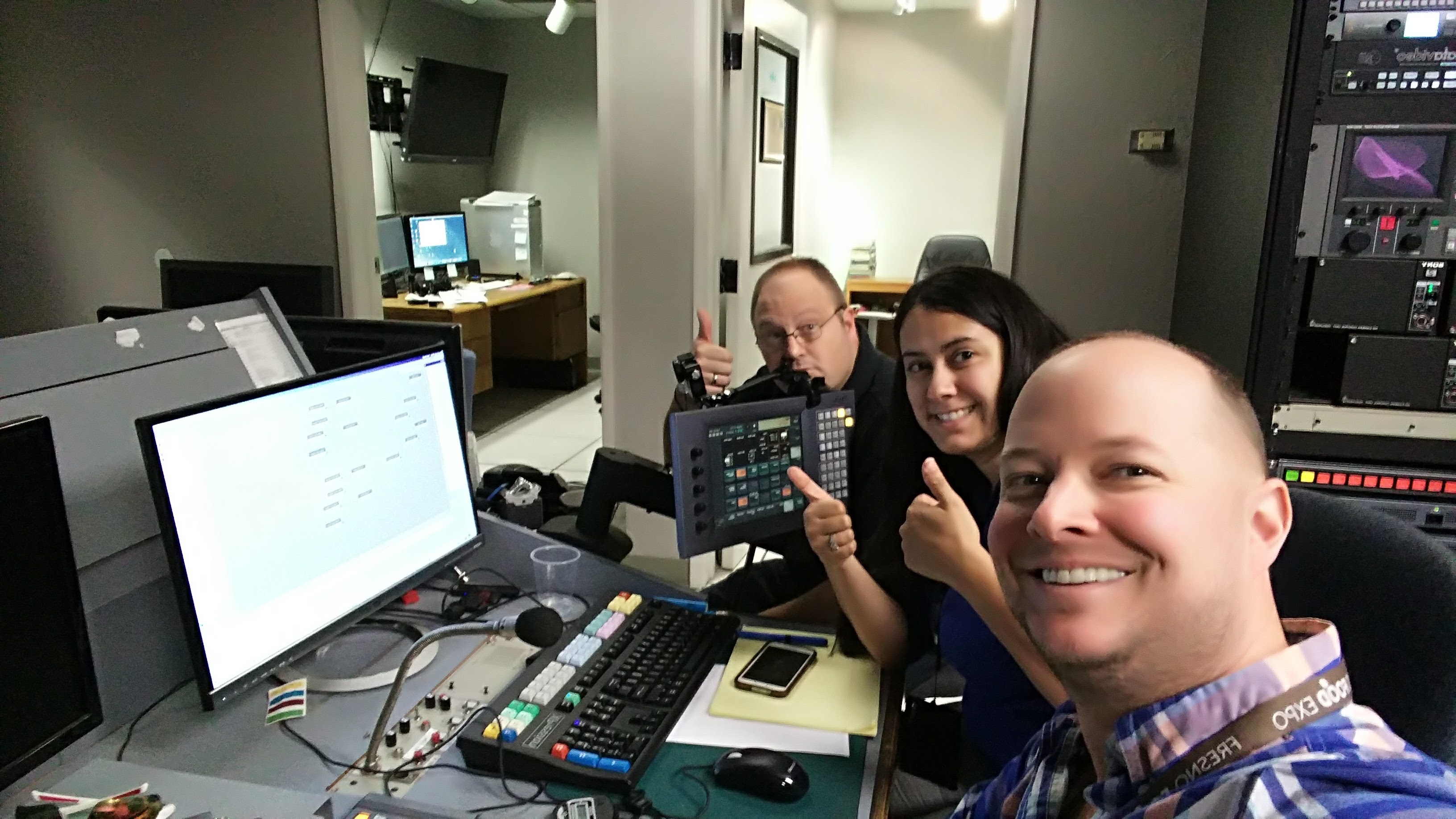 Honestly, the best part, is the training itself.  The actual work.  When you work with a good product, it’s all the more easier.   But the people are the best part.   At every location I’ve ever been to… nearly a hundred stations, meeting at least 2-3 people per station, every single one of them have been receptive, respectful and appreciative.  Some I still keep in contact on a regular basis.   The customer realizes how you’ve traveled such a far distance, only to show them how to use their new toy.   The customer may get overwhelmed with new learning material, but in the end, they see a product which translates into progress and improvement for their network.

My day is still a 9-5 however (in some cases longer, and in other cases, can be shorter), so by the time I’m finished, I’m still tired (in this case, it’s 9pm AST).  My wife’s bugging me about stuff… whether it’s our daughter not doing homework, or the internet doesn’t work, or there’s a burnt light bulb that needs replacing, my chore becomes video chatting with them to appease their stress.    Away a week per month ain’t too bad, but more than that, the family gets lonely.

This repeats the following day.  And I do admit, that in some cases, I have added an extra day to my stay depending on the locations.  Brazil as an example, I arrived early and visited Copacabana. Japan, I checked Mount Fiji and Amsterdam, I took a day trip to Bruges.   It’s a good perk that comes out of pocket, but worth it if you’re away at a far distance.  And of course, you need to collect some souvenirs for your partner, seething jealously at home.

Alas, it’s time to go home.  But as I mentioned earlier, it doesn’t always go smoothly.

Again to appease your clients, some flights may take a different route, with different airlines,  so the prices are a little lower.  That was the case this past week in Fresno.  Rather than flying through San Francisco, my flight path was Fresno, Denver, Boston, finishing in Halifax.

My departure time was 8:30 am PST.  I had a meeting with a new potential customer out of Montreal, at 7 am PST, so I decided to head to the airport early, go through security, grab some breakfast and be ready for my call at 7am (10am EST).  The call went great for the record, but while on the call I missed the announcement saying that my flight to Denver was delayed.

Queue the California fires.  Some things you have no control over, such as nature.  Others, you get refunded if it’s the airlines’ fault.   My plane was delayed due to mechanical issues, which meant I was going to get some vouchers.  Alternatively, there was a 2nd flight leaving an hour later, but that too was delayed due to the fires happening in California.   I was a lucky one, since flights to San Francisco were altogether canceled.

That said, my flight left 3 hours late.   Which meant I missed all my connecting flights.  The next available one was 11:30 pm MST.  In other words, stuck at the Denver airport for 9 hours with $30 in vouchers.  And you get the terrible red eye seat too.. the one where you’re in the middle and the seat won’t recline because you’re in the emergency exit aisle. 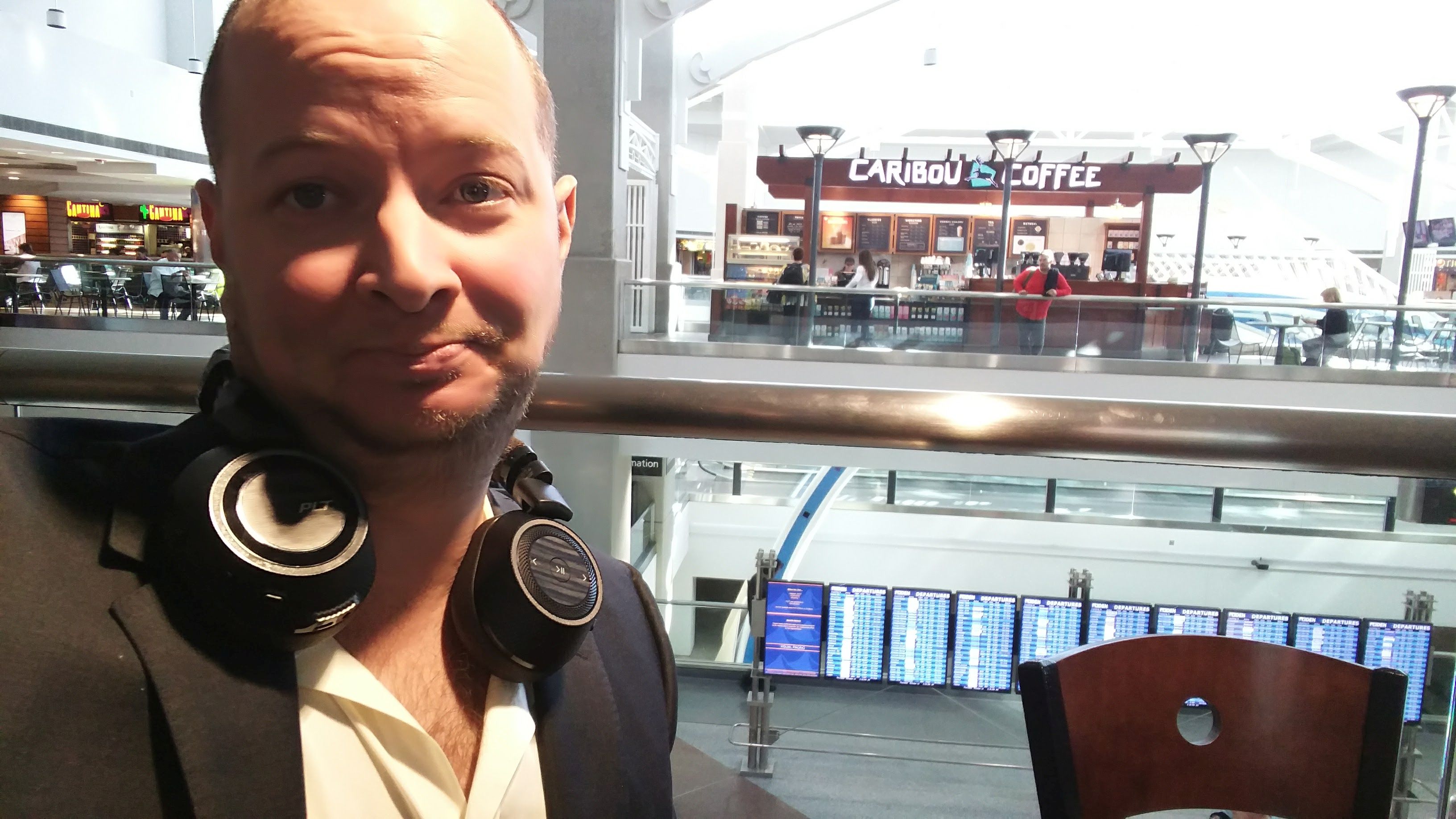 I had a decent airport meal for $20… the other $10 voucher, I passed along to a single mother with kids so she can feed them McDonald’s.  Besides, I have lounge access where they serve you crackers and cheese and cookies.  (Those who know me, know I don’t drink… but if I did, there’s some wine and liquor there waiting for you too)  (picture is proof for my wife that I’m actually at an airport, and not hanging out with some girlfriends.)

Walking the halls of the Denver airport at 11:00 pm is eerie.  Stores are closed.  Cleaners vacuuming. 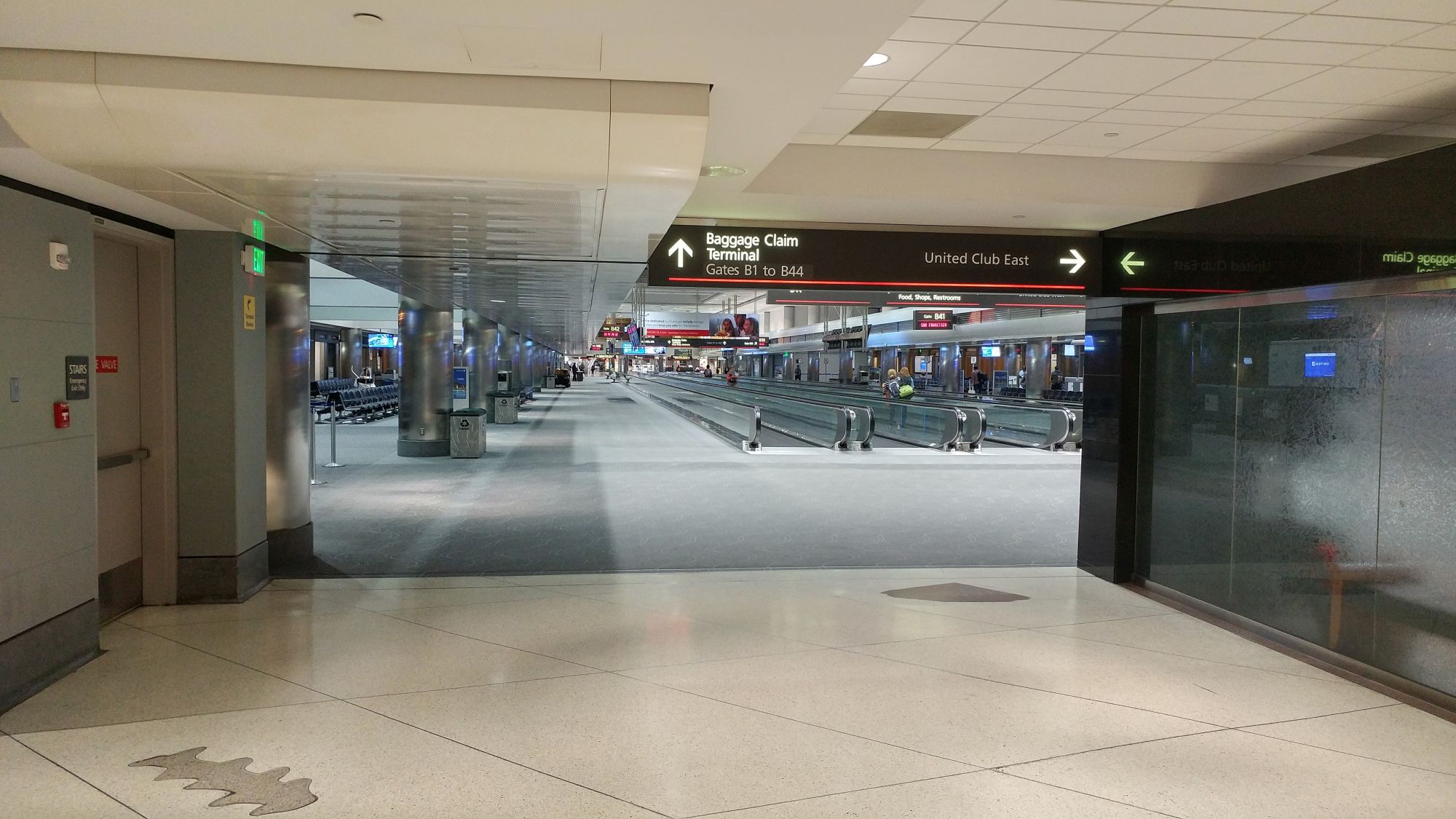 I got home on Friday at 1pm.  A trek that took 27 hours from the time I left the hotel room.   Exhausted, I still have light bulbs to replace and help supervise homework.   Tomorrow is mowing the lawn.   And next Monday, it may start all over again.