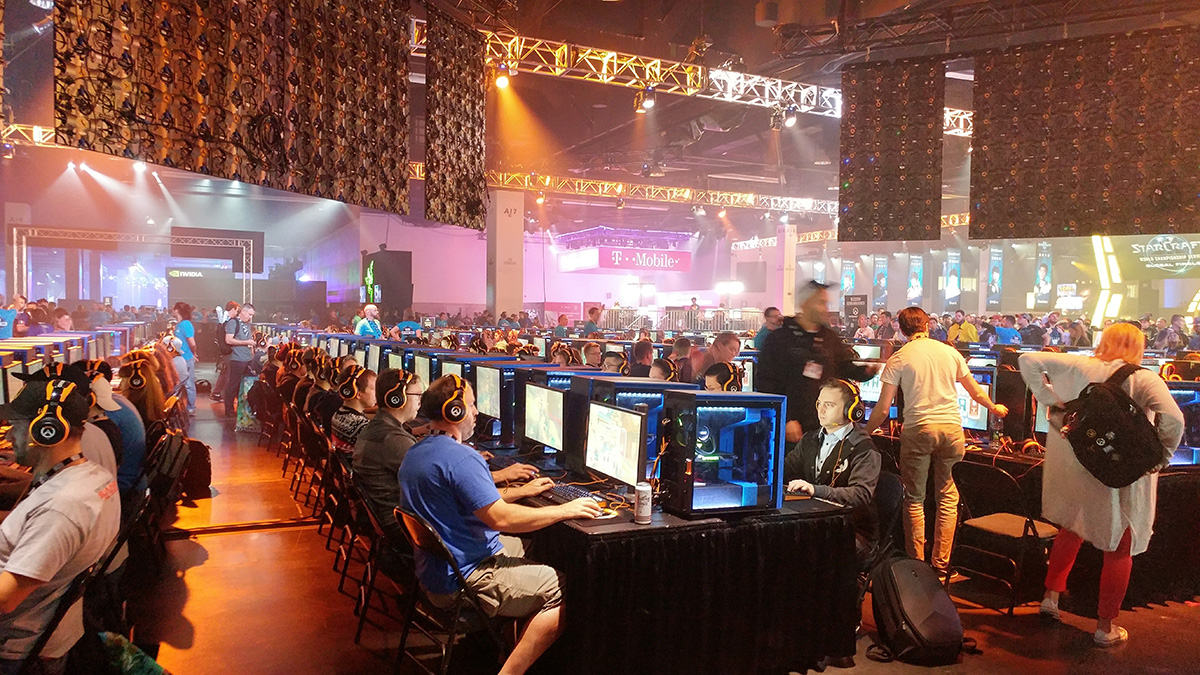 It’s time to have a serious talk about how e-sports is changing the way people are consuming content. Endless news articles report on the “demise” of viewership on traditional cable networks but on the other end of the spectrum – where are viewers going?  Hopefully this article will give cable companies and other media professionals insight on this new breed of broadcasting.

Let’s examine two recent events –  King’s Cup 2017 and Overwatch World Cup 2017 where Alain Savoie, Creative and Technical Director for Bannister Lake, assisted with their live data and graphic needs.  The two events are great examples of how this new medium is disrupting content for a new type of viewership.

The King’s Cup tournament is structured like a one off, a stand alone event where amateur players from around play for an opportunity to win $20k.  Some 200 players competed through multiple rounds to reach a final 8 tournament joined by pro players and celebrity Youtubers.  The highest amount of viewers were around 200,000 with about 1.5 million in total watching on the last day of the event.

Overwatch, was part of Blizzcon 2017.  World pro players have been competing for weeks and this event included the final 8, going head to head to win bragging rights.  The Anaheim Convention Arena, where this tournament took place, had about 8,000 people watching on location.  At Blizzcon however, there were an extra 2 stages where other streams and events were happening.

It’s an area of media that is growing exponentially. Every year there are more subscription-based and knowledge-based gamers attending these events. The attendees have a lot of money to spare.  The most recent experience at BlizzCon witnessed roughly 26,000 people at $200 per ticket.   That amounts to $5 million dollars.  That figure doesn’t include the virtual tickets that were also purchased nor the sponsorship that were involved during the weekend.  And the sponsorship deals?  They are not small. The 2 day Overwatch World Cup was sponsored by T-Mobile.  Don’t forget the merchandise where it’s recommended you purchase online, ahead of time and pickup at the conference because, (as seen in the picture) the lines are long, snaking endlessly for what looks like a queue at your favorite Disney ride. 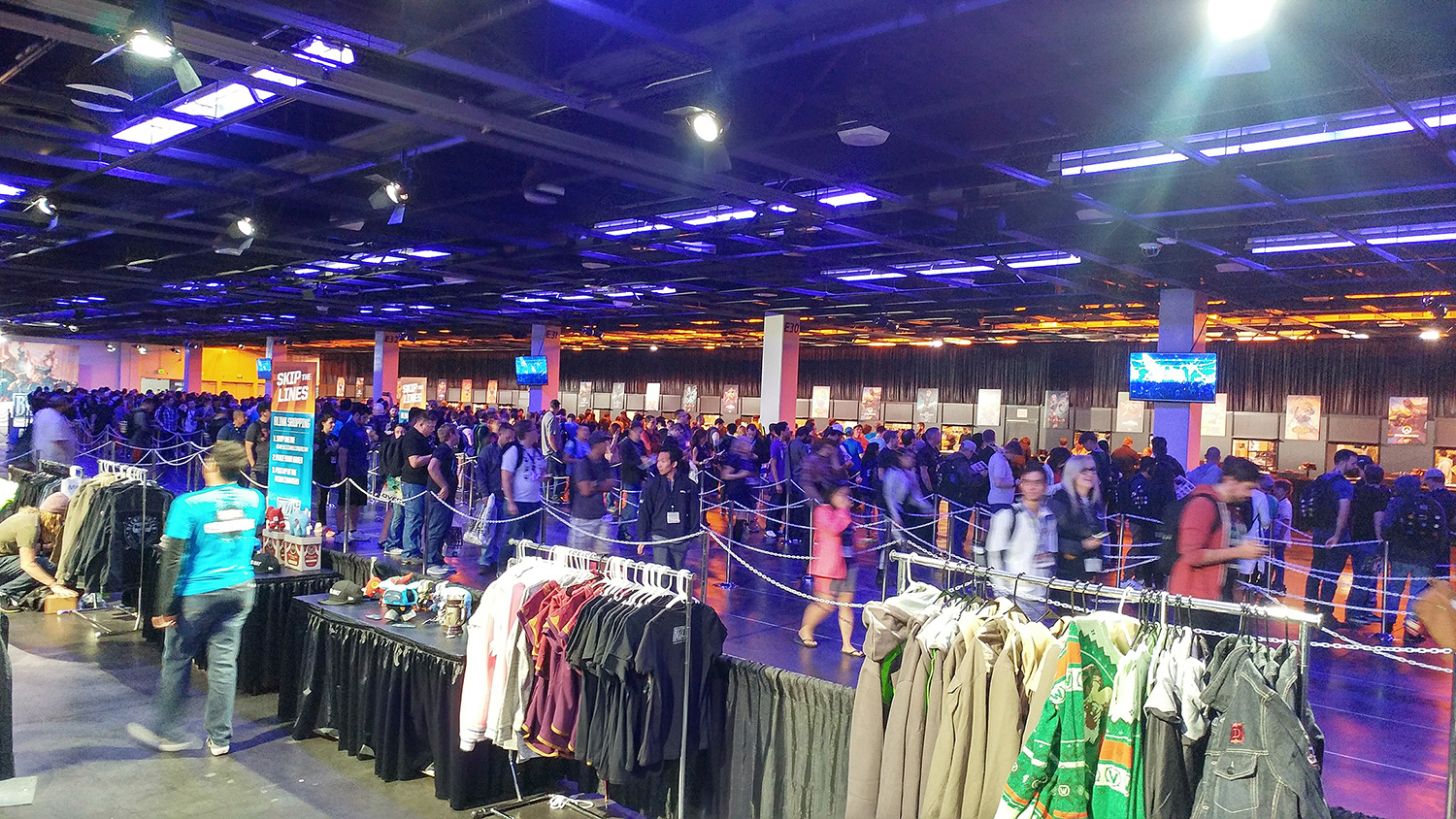 There are No Rules!

The other factor to keep in mind is that the content creators for these events don’t care about the traditional rules of broadcasting.  No need for 1080i, or 2 minute commercials every 15 minutes.  Kings Cup was streaming at 1080p while Overwatch was at 720p.   Commercial breaks ranged between 2 minutes to 6 minutes depending on what was happening behind the scenes.   The broadcast doesn’t need to end at exactly hh:mm, that said, even gamers eventually tired out.   The production will always have requirements to get paid by their sponsorship partners, and therefore, frequencies of snipes and billboards vary on when to air it.

Currently live non-sporting viewership is dropping and binge watching content is rising.  While the sporting events on traditional broadcasts still pull in large and relatively reliable numbers, people are still fascinated by live events and the same can be said for e-sports.   The idea of a community participating in a live worldwide event at the same time, still appeals to hardcore fans, while archives of the tournaments can be watched on YouTube post-event. Try to find a complete Superbowl or Stanley Cup finals on YouTube. e sports rights holders are less concerned about distribution partially because they are the distributor.

Putting on a live show used to be expensive, especially in manpower.  With the popularity of e-sports for the younger generation, the distribution means are not conventional and therefore viewership is generally lower.  So there’s this need to produce content at a more affordable rate while still offering the same level of quality product expected in high end sporting events.    Make no mistake, the event staging and tech was high end but behind the scenes the crews were generally leaner.

The stages had their four to six professional cameras feeding the studio switcher.   They also had Go-Pros attached to the monitors of each player.   An immediate difference to conventional sports was the actual in-game videos.  Overwatch as an example, had a TD switch between all 12 players, allowing us to watch from the POV of the gamer.  The replay engines are 2nd to none.   For years EVS operators  in sports have been responsible for capturing and playing back highlight reels of a play.   In the e-sport world, some games do those highlight playbacks for you, with outstanding angles and exceptional render quality.

One important observation to note is the knowledge base of the product by the viewers, who range between ages 12 to 40 years old, mostly males in their 20s.  One thing’s for sure –  they know their content.  Watching football, baseball, soccer, and hockey, most die-hard fans know enough stats but don’t necessarily need to know how to play the games. They have a rough idea of what’s going on.

Content and viewing games such as Overwatch, Clash of the Clans, Call of Duty, and like, demands a viewer’s undivided attention. There are different game plays, maneuvers, strategies, equipment, and stats that are not immediately obvious to newcomers.   The content is delivered and therefore ingested very quickly.  It’s easy to follow a baseball game, but it’s a lot harder following Overwatch. 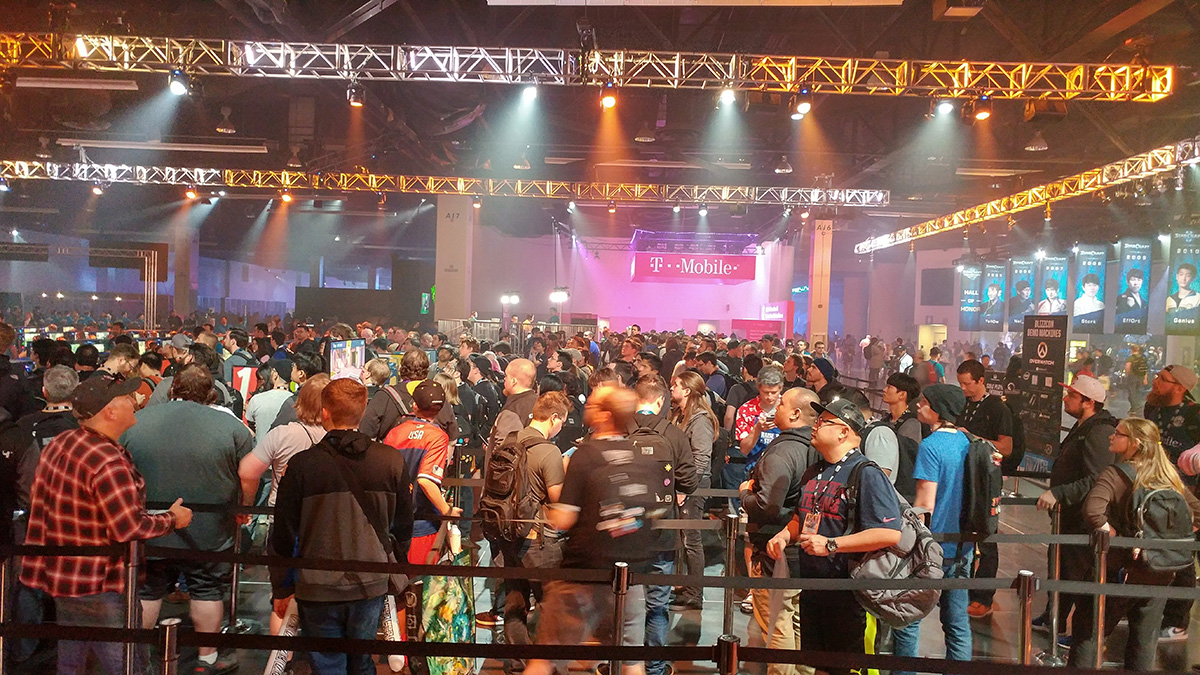 The attendees also lineup to play games.  Rows of computers are setup for people to play the game and there are easily hour long line ups to play them.

The majority of attendees were white males in their twenties, with a fair share of white females.  Plenty of Asian players as well but noticeably lacking were African American players.

Assume that each of these attendees is going to go home and buy this game.  Therefore, there’s a large sum of money being made by the gaming industry.  Their goals with having the Championship matches streamed is to attract more viewers for higher ratings in sponsorship money which then also leads to merchandise sales and perhaps the sales in the game itself.

As for the professional players, they’re well structured and organized.  There’s a committee for each team to select the players, there’s a captain on the team as well as a coach.  The players form strategies in the games and the hard-core fans know who they are and how they’ll play.  The pro-players aren’t kids arriving in sweatpants and t-shirts. They are sponsored and dressed in proper uniforms, representing their country. They take this very seriously.

Future of traditional cable and e-sports

Is there a future in cable and e-sports?  Will cable companies embrace this new medium?   They haven’t so far.   YouTube, Facebook and Twitch have.  Tellingly, that’s where the new generation is going for their consummation of content.   TBS stations are showcasing some redistributed content on occasion.  And there are some new streaming channels being created, dedicated for watching games.

Since the medium is relatively new, there’s a lot of research and development still being made in how to distribute and display this content.  In the traditional sporting world, data and score bugs have been in the works for years, where in most cases these days, you can get data directly from the arena.  With e-sports, the game developers haven’t fully developed the integration with broadcasting in mind, so a lot of data and results and stats are manually being entered, or being transferred in a more manual method.

Games will eventually improve as well.   Virtual reality will eventually let viewers watch the game from inside the game as it’s being played.  Certain game styles may also develop stories to go along with the sports itself.   And although for now, some of these games are tournaments, there’s no reason why EA’s FIFA or MADDEN, won’t eventually include a year long season, with pro-teams, training facilities,  players, draftees, general managers, coaches and captains.   This also means camera crews, TD’s, audio techs, CG ops, EVS ops and others are needed to produce these events.   Even the Olympic and NCAA committees are discussing the possibilities of including these e-sports into their organizations.

As for the production itself, foreign streams will become more important as e-sports isn’t necessarily regional, but rather international.  Conventionally, Olympics and International tournaments require the distribution be done by the destination country, e-sports tournaments are produced and distributed at the source.  So multiple language streams and data will increase viewership and therefore revenue, followed by the necessity to develop content for those streams.

Baby Boomers as parents didn’t understand the appeal of Gen X’s fascination with Atari and Nintendo.  Those platforms generated millions of dollars and created the infrastructure that launched Millennial’s interest in gaming.  Gen Xers are creating at the same level as Millennials and will soon be overtaken by their interests so current generations shouldn’t ignore Millennials interests in this e-sports world.